Review - The Making of a Gentleman by Shana Galen

The Making of a Gentleman is the second in Shana Galen's Sons of the Revolution series and picks up the story a few months after Book One, The Making of a Duchess (which I reviewed in June) concluded. Readers of Book One will remember that Julien needed to rescue his brother Armand, who'd been locked away in a French prison for twelve years. As a result of his imprisonment, he has lost the ability to speak and interact with polite society, so Julien and Sarah decide to hire someone to help him. What they don't tell Felicity Bennett, a well-educated woman in need of a position, is that her pupil is a grown man. Felicity has a secret of her own - a reprobate betrothed who is blackmailing her to free her from their marriage agreement.
Their first meeting leaves them both shaken, but drawn to each other and Felicity decides to stay to help Armand, despite his peculiar ways and haunted aspect. For his part, Armand finds Felicity is the one person who can touch him without pain and soon finds himself needing to be with her as much as possible. When a threat from his past resurfaces, he is even more desperate to protect this woman who is helping to free him from the prison of his mind. But will her past be the undoing of them both?
As with Making of a Duchess, Ms. Galen has brought together an engaging heroine and a tortured but noble hero in a rivetting story with lots of twists and turns. The setting is impeccable, with just the right amount of detail while the characters, major and minor, sparkle. It's wonderful to see Julien and Sarah's relationship continue, yet they don't overwhelm the developing romance between Armand and Felicity. The pacing is perfect as the narrative moves between Armand and Felicity and the subplots involving their secrets.
My only quibble is that one plot point involving Felicity, drags on for just a little too long, but this was merely a minor annoyance as the rest of the story is fresh, intriguing and full of the right combination of romance and adventure. This book was a delight from start to finish and I can hardly wait to read the concluding volume which promises to bring all three brothers together again. I highly recommend that fans of historical romance find and read this book. 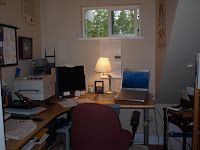 Melissa over at Writing with Style asked her readers to post about where they write - here's my response:

To the left you can see my office. It's where I write when I can find the time these days. The lamp is a very recent addition and I love it!

My office is very cozy and has everything I need, including a bookcase with loads of research books and binders with information on my characters, a window for natural light, room enough on my desk for a cat (or two) to snooze and keep me company, and speakers so I can plug my iPod in to listen to music while I write. The small table to the right of my desk belonged to my grandmother - she was one of the first people to encourage me in my writing, so it helps me feel close to her. Also on my desk is a small figurine of a boy and girl standing face to face. My dad bought that for me years ago as a gift while he was on a business trip - I treasure it and who knows, maybe that's what inspired me to write my first love story.

I also have photos of Sean and me, which helps remind me of the true nature of lasting love.

Email ThisBlogThis!Share to TwitterShare to FacebookShare to Pinterest
Labels: desk, office, where i write

I've been assigned to a special project at work which will take up lots of my time...any spare time goes to my husband and my studies...I'll return with the Book Meme once the project is complete.
Watch for a book review of Shana Galen's upcoming release from Sourcebooks later this week...
Teresa
Posted by Tess at 10:26 p.m. No comments:

Tess
British Columbia, Canada
I live with my husband and our two cats on the beautiful Sunshine Coast in British Columbia, Canada. In May 2006 we moved here from the Ottawa area, where I've spent most of my life. I work part-time as a Library Technician at the local library in Sechelt and just LOVE it. When I'm not at work, I'm writing - either my current wip, or articles and reviews, or volunteering at the Sunshine Coast Museum and Archives. My husband and I share a passion for history - we met in a university seminar on Medieval England. That passion led me to the world of historical romance fiction. One day I hope to be published, but even if that never happens, I'll continue spinning love stories set in the past. Favourite periods: Middle Ages, French Revolution, Georgian England


I love reading The Coast Reporter!
I love my CBC!
I miss my CBO!
Visit my Photo Album
See my Flickrstream
Read The Citizen
Visit the Sechelt Library

Some photos hosted by: