And if you LOVE English history....

you'll also like this post from Amy over at Passages to the Past. It lists a number of the books on English history being released over the next few months *sigh*. Check out the books in her sidebar too. I probably should STOP visiting PtoP *g*, but OTOH, now I work in the library I guess I should be aware of recent releases, right? (she say, blinking innocently).

Currently Reading: The Love Academy by Belinda Jones
Posted by Tess at 9:49 a.m. No comments:

Over at Amy's Passages to the Past blog is holding a Book Giveaway contest for Susan Holloway Scott's latest novel (about Charles II and the Duchess of Portsmouth), The French Mistress.

There's still plenty of time to enter and Susan's books never disappoint, so be sure to surf on over for your chance to win :)

Currently Reading: The Devlin Diary by Christi Phillips
Posted by Tess at 2:51 p.m. No comments:

Rewriting from a different point of view....

I think I may FINALLY have hit on what's wrong with the opening to my completed FR story. Originally, I opened it in my heroine's pov - at some point, I changed that to my hero's. I've rewritten those first few lines COUNTLESS times since, eliciting advice, rewriting again and yet somehow it's never quite worked. And now I think I know why - because Cécile is meant to speak first and continue speaking till about half-way through the opening scene when Adrian originally took over.

Hand slaps to forehead. Fortunately I still have the old opening. Lots of it will have changed, but the basics are there, so I don't have to start from scratch completely. Something tells me it will end up being a complete rewrite, but there's something comforting about beginning the process with words on the page. We'll see. I just have to squeeze this rewrite in. It WILL happen as none of my characters are taking this school excuse lying down any more. They're demanding my attention.

Overall, I feel a huge weight has lifted as far as this story is concerned. It's something so simple, something I know I can do.

Have you had a writing epiphany lately? Care to share?

Sean was home early enough from covering a local council meeting to suggest a walk down at Davis Bay :) I grabbed my camera and tripod and off we went.

It was beautiful down there - tide was either on its way in our out (can't say for sure), but the water was calm and the temperature just perfect. We walked along to the first major bend, then set up the tripod, so I could take a pic of the sun going down: 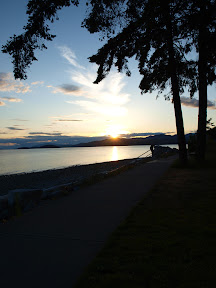 Here's a view looking the other way - you can see the colour on the logs - so beautiful and I love that my DSLR can pick up such subtleties: 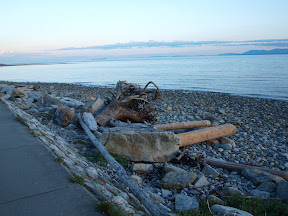 Alongside the path are gorgeous flower beds, so I turned on my macro feature: 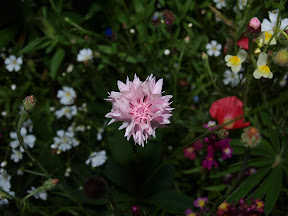 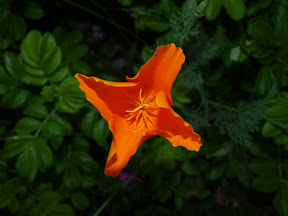 As we wandered back towards the car, we noticed a mama duck with ducklings in tow (yet another occasion I longed for a telephoto lens): 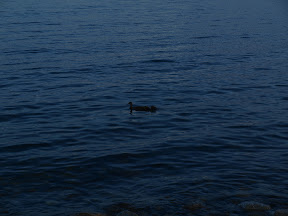 The colour in the sky looking towards the south end of Vancouver Island was beautiful too: 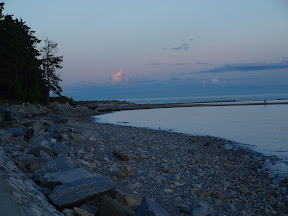 Look how peaceful the water was - we truly do live in paradise here: 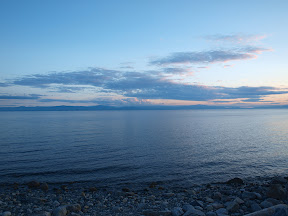 Hope you enjoyed this brief interlude :)

A cool resource for historical writers...

It's the Historical Thesaurus of English, hosted at the University of Glasgow.

Even writers of contemporaries may still find it useful :)

I'm very busy with school right now - will be back with you as time allows.

Here are some photos from our trip to Tofino: 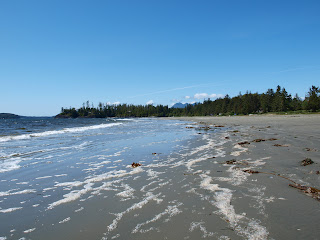 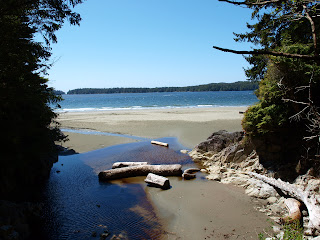 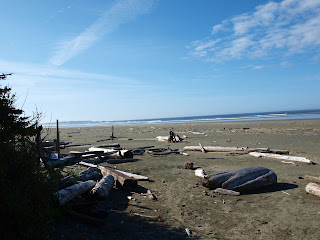 To see more pics and read about the trip, visit my Windshield Chronicles blog.

I remember how much time I spent in my school library, from the time I was a wee one in elementary school, through middle school, when I was a student volunteer and then in high school where I spent lots of time doing research. So this story upset me a lot. And it's happening here in Canada too. I can't believe school boards are so short-sighted they can't see that school librarians are absolutely necessary. Mrs. Shore and Mr. Dalton (elementary and middle school librarians) stand out in my mind to this day. Mrs. Shore was very strict with us and taught us the correct way to handle books, as well as the ins and outs of the Dewey Decimal system etc. while Mr. Dalton gave us more and more reponsibilities over the two years I was one of his volunteers, giving me my first real taste of how things ran behind the scenes in a library.

As the reporter rightly points out, there are many adults who don't know how to use the library, so how are they going to teach their children? And with so many parents having to work full-time, even if they are familiar with the library system, will they have the time to introduce their children to it? We had a regular library class with Mrs. Shore throughout my elementary school years. And Mr. D was always available to help. I can't imagine how school boards expect children to gain the knowledge they require without help for a librarian, especially in smaller towns where the public library might also be suffering from cutbacks to its hours.

What do you think of this? Do you have fond memories of any of your school librarians?

In other news, we were away in Tofino last week - it was a wonderful mini-vacation. I'll post a small piece about it here soon and give a full report over on my Windshield Chronicles blog as time allows.

Currently Reading: Once in a Lifetime by Cathy Kelly
Link of the Day: Historical Thesaurus of English
Posted by Tess at 5:10 p.m. 2 comments:

Tess
British Columbia, Canada
I live with my husband and our two cats on the beautiful Sunshine Coast in British Columbia, Canada. In May 2006 we moved here from the Ottawa area, where I've spent most of my life. I work part-time as a Library Technician at the local library in Sechelt and just LOVE it. When I'm not at work, I'm writing - either my current wip, or articles and reviews, or volunteering at the Sunshine Coast Museum and Archives. My husband and I share a passion for history - we met in a university seminar on Medieval England. That passion led me to the world of historical romance fiction. One day I hope to be published, but even if that never happens, I'll continue spinning love stories set in the past. Favourite periods: Middle Ages, French Revolution, Georgian England


I love reading The Coast Reporter!
I love my CBC!
I miss my CBO!
Visit my Photo Album
See my Flickrstream
Read The Citizen
Visit the Sechelt Library

Some photos hosted by: